Tulip buttons for a custom order!

Posted by heather knitz at Wednesday, April 18, 2012 No comments:

"Are you working on a sewing project that requires buttons? If so then you must check out Blue Manatee Buttons before running out and paying..."

Check out this lovely feature on my button shop!
Posted by heather knitz at Thursday, June 23, 2011 No comments: 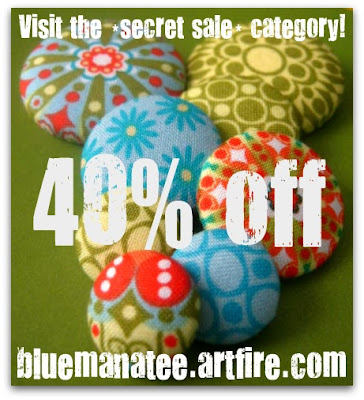 On the 7th and 8th day of Christmas, BlueManatee gave to me...
40% off selected handmade button sets!
Use coupon code: buttons40 to receive 40% off from the "secret sale" category section!
Posted by heather knitz at Tuesday, December 07, 2010 No comments:

Rag Hearth: On the 2nd day of Christmas, RagWreath gave to me...

Rag Hearth: On the 2nd day of Christmas, RagWreath gave to me...

Posted by heather knitz at Thursday, December 02, 2010 No comments:

Blue Manatee Buttons & Gifts: On the 2nd day of Christmas, Bluemanatee gave to me...

Blue Manatee Buttons & Gifts: On the 2nd day of Christmas, Bluemanatee gave to me...
Posted by heather knitz at Thursday, December 02, 2010 No comments:

Blue Manatee Buttons & Gifts: On the first day of Christmas...

Blue Manatee Buttons & Gifts: On the first day of Christmas...

On the first day of Christmas...

On the first day of Christmas, BlueManatee gave to me...
a buy one, get one SALE on
hair accessories! Happy Shopping!
bluemanatee.artfire.com
Posted by heather knitz at Wednesday, December 01, 2010 No comments:

This coupon entitles you to 30% off your total purchase made.


30% Off
This coupon entitles you to 30% off your total purchase made.

Etsy On Sale Blog: Tag, You're It! Our New Tag Tool

Etsy On Sale Blog: Tag, You're It! Our New Tag Tool: "We have over 190,000 items on sale right now--incredible! We stayed up late last night making sure things went smoothly with the start of B..."
Posted by heather knitz at Saturday, November 27, 2010 No comments: 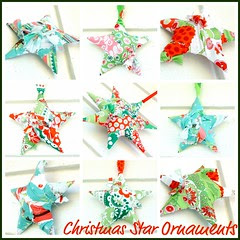 Christmas Star Ornaments
Originally uploaded by heatherknitz
The three Magi are related to the Christmas Star History. The reliable account about the star that helped the three wise men to find the route that led them to the dwelling place of Jesus Christ at the time of his birth is found in the Book of Matthew 2 of the Bible.

The Christmas Star History finds its reference in King James's translation of the Bible as it states, "Lo, the star went before them, till it came and stood over where Baby Jesus was lying'. This has given rise to the conclusion that the star was probably some kind of a beam of light that guided the three Magi. So it is taken into account that it would not have been possible for any astronomical phenomenon to perform the function of the star, that is to show the three men the right track. Therefore it is suggested that the star must have been a manifestation of God's glory. Other translations of the Bible, one of which is the New International version also points out that the, "star went ahead of them (the three magi) until it stopped over the place where the child was". This clears the fact to a certain extent that the star appeared in the sky to guide the three men and disappeared when they arrived at their destination.

It needs to be mentioned that the Greek word Aster is a generalized term than our English Star. It can refer to any kind of heavenly body that is, it may refer to a star or a planet, an asteroid, comet or even a meteor. But this particular interpretation that it was a star in the real sense of the term is consistent with all the facts presented. Christmas Carnivals offers information on the Christmas Star History and Christmas Celebrations worldwide. 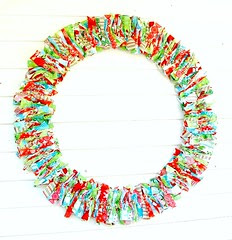 OchristmasTree large 30 inch rag wreath
Originally uploaded by heatherknitz
Get ready, the holiday decorating is just around the corner!

This large wreath is 30 inches in diameter. I actually should call it a mega, large wreath:) I love to hang these outside, on the exterior of my house, under a covered porch, throughout the holiday season. It's fun to have a flood light in red, green or blue directed up toward it! It's a fun little outside decoration!
Posted by heather knitz at Saturday, October 30, 2010 1 comment:

Thank you to my sponsors...

View my page on Indiepublic

I love these sites! 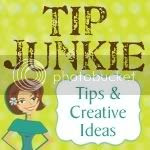 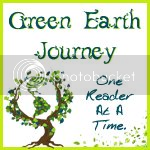 Go ahead, drop it!

This is a Flickr badge showing public photos and videos from heatherknitz. Make your own badge here.

Ode to the Preppy Handbook: Blogs of Pink and Green

"The pictures and descriptions that accompany each item are Copyright © heatherknitzdesigns. You are more than welcome to use them in an article or blog, but please contact me, and credit the source."